For Dawoud Bey, a successful portrait reveals a person’s interiority. Perhaps this is why his work has been called a “civic act of seeing”. In a career spanning forty years, he has used photographs to serve as a counternarrative to the pathologized portrayals of people on the margins. From series as diverse as “Harlem USA” to “Class Pictures”, Bey allows subjects to engage directly with the viewer, developing intimacy between the two. Bey’s recent work pays homage to black trauma and history. The Birmingham Project, which gained him a MacArthur Genius Grant, aims to evoke what was lost during the 16th St. Baptist Church Bombing in 1963 and its aftermath. The Underground Railroad and Night Coming Tenderly, Black take space and location as its subjects to explore how enslaved people moved under the cover of night to escape towards freedom. Dawoud says that his work–whether it is the black subject, marginalized histories, or teenagers–is all about giving subjects their due value. 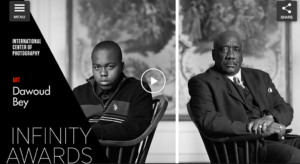