What Murals Can Tell Cleveland About Itself

Inspired by a 1973 arts program, a new triennial aims to make the city “a living museum of contemporary abstraction” and start a few conversations along the way.

Downtown Cleveland was in a state of upheaval in the 1970s. “It was a period of severe decline,” said Fred Bidwell, who was a college student in the city at time and now serves as the executive director of the Front Exhibition Company. Employers were deserting downtown. Retail was on the way out, too. “It was a really rough time in the history of the city, and the downtown was devastated by that,” Bidwell said. 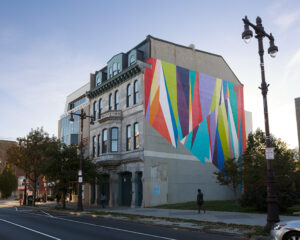 Odili Odita's "Our House" as seen on Broad Street in Philadelphia. He'll be bringing his colorful, geometric forms to Cleveland as part of the Front International Cleveland Triennial for Contemporary Art Steve Weinik/City of Philadelphia Mural Arts Program
← Previous Next →