Recently exhibited at last fall’s Independent Art Fair in New York, Ken Nevadomi received enthusiastic critical reviews from the New York art press. As Andy Battaglia of Artnews opined, Ken’s “paintings...are entrancing and enigmatic, in an array of styles that are hard to reconcile as the work of only one artist. The elusive but evocative subject matter drifts between strange fever-dream visions and sly allusions to the artist’s past as a commercial illustrator.” For Max Lakin of Artforum to proclaim Ken’s “berserk neo Expressionist paintings and drawings, easily the best thing [he] saw” throughout the melee of Armory week, though delayed, Nevadomi’s arrival in New York was a big success.

Clarence Holbrook Carter achieved a level of national artistic success that was nearly unprecedented among Cleveland School artists of his day, with representation by major New York dealers, scores of awards and solo exhibits, and streams of praise flowing from pens of the top art critics. Over the course of his 60+ year career Carter evolved from an exceptionally fine American Scene painter capable of evoking deep reservoirs of mood, into an abstractionist with a strongly surrealist bent. 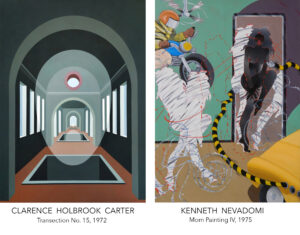