Horse Opera, a new video created by Moyra Davey for FRONT 2022, follows the exploits of its protagonist, Elle, as she joins her friends at various dance parties and music performances across contemporary New York City. Associative in approach, the work juxtaposes the artist’s narration with other footage of animals, objects, and interiors. The voiceover’s tales of collective experiences of joy in utopic, youthful spaces of abandon contrast as well with themes of bodily surrender to age and the passage of time. When she is not staying up all night under the disco ball, Elle reveals an inner monologue influenced by a reading list of authors such as Hilton Als, Anne Boyer, and Elizabeth Hardwick.

More than in previous Davey films, music punctuates the artwork’s cyclical progression and the narrator’s journeys, which are also interrupted by the need for social distancing and its ensuing alienation. Yet these parties, inhabited by a diverse, multi-generational group, serve as a vital intersection point for different communities. In conjunction with images of horses and other more-than-human beings, the work hints at the affinities that form across distinctions of class, family, ability, and species.

Davey’s research for this project was inspired by visits to the dance communities in New York City that inform artist Martin Beck’s project Last Night, featured at Bop Stop and Transformer Station as part of FRONT 2022. This invisible connection of friendship draws a link between these two artists and suggests other bonds of conviviality that underlie this—and every—large-scale undertaking. 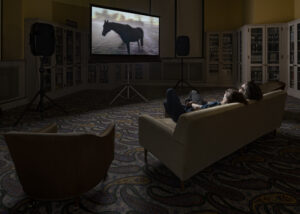 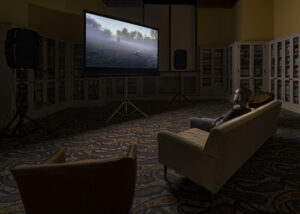 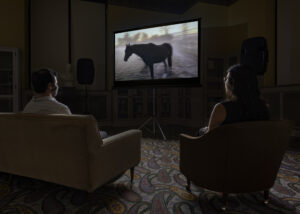