FRONT International: Cleveland Triennial for Contemporary Art, in partnership with the Cleveland Museum of Natural History, presents an artist talk and a family-friendly workshop inspired by artist Asad Raza’s public sculpture Orientation, installed on Wade Oval as part of FRONT’s 2022 Triennial. The sculpture, which is made of materials gathered from Lake Erie, such as zebra and quagga mussel shells, is a human-scale version of the 16th-century astronomical instruments at Jantar Mantar in Jaipur, India, and invites exploration by visitors and residents alike.

Registration for this free event is encouraged, but not required.

Wade Oval, 10820 East Boulevard, Cleveland, Ohio 44106. This event will be canceled in the case of inclement weather.

Join Asad Raza and Cleveland Museum of Natural History astronomers Nick Anderson, Peter Hedman, and Destiny Thomas for a guided exploration of the sculpture, as well as interactive demonstrations, hands-on activities, and safe solar viewing (weather permitting). The astronomy team from the Museum will lead kinesthetic activities that explain the reasons for the seasons and why we see different constellations at different times of year. Visitors will be invited to make models of useful astronomical tools, such as sundials and planispheres. Crafts will encourage children and adults to put their creativity to the test and invent their own unique star patterns. Visitors will also have the opportunity to make solar observations using pinhole cameras and shade no. 14 welder’s glass.

About the Artists and Presenters:

Asad Raza creates dialogues and rejects disciplinary boundaries in his work, which conceives of art as an active, metabolic experience. Using actions and processes such as soil-making, tennis, and horticulture, his projects create encounters within and beyond the exhibition setting. They have been realized by institutions including the Whitney Museum of American Art, New York; Kaldor Public Art Projects, Sydney; Gropius Bau, Berlin; the Serpentine Galleries, London; Kunsthalle Portikus, Frankfurt; Metro Pictures, New York; WEST Den Haag; Urbane Kunst Ruhr, Essen; the Lahore Biennale; and the Venice Biennale for Architecture.

Aviva Rothman is an Associate Professor in the Department of History at Case Western Reserve University. She received her Ph.D. in history from Princeton University in 2012. She has served as a Collegiate Assistant Professor and a member of the Society of Fellows in the Liberal Arts at the University of Chicago, and as a Bradley Fellow at Carthage College. Her first book, The Pursuit of Harmony: Kepler on Cosmos, Confession, and Community (University of Chicago Press, 2017) focused on German astronomer Johannes Kepler and the connections he saw between the harmony of the heavens and the harmony of church and state. Her second book, The Dawn of Modern Cosmology: Copernicus to Newton, an anthology of newly translated texts on the Copernican Revolution, will be published in 2023 with the Penguin Classics series.

Destiny Thomas earned a B.A. in physics and astronomy with
a minor concentration in philosophy from Emory University. Dedicated to STEM education and community engagement, Destiny served as STEM Learning Teacher and Guest Engagement Specialist at the Great Lakes Science Center. More recently, she has held roles as Community Programming Coordinator and Museum Educator at the Cleveland Museum of Natural History, where she currently serves as Astronomy Education Coordinator.

Peter Hedman earned an AB in Earth and Planetary Sciences at Harvard University, where he focused on outreach of science concepts to non-specialists in his work as a teaching fellow and as president of the student astronomy club. At the Museum, he has worked designing shows for the Museum's Nathan and Fannye Shafran Planetarium and concepts for the Museum's transformed galleries. He now serves as the Museum's Data Visualization Analyst, a new role that will leverage his experience in software development to streamline data insights across many departments

About the Cleveland Museum of Natural History:

The Cleveland Museum of Natural History illuminates the world around us and inspires visitors to engage with the natural forces that shape their lives. Since its founding in 1920, the Museum has pioneered scientific research to advance knowledge across diverse fields of study and used its outstanding collections, which encompass more than 5 million artifacts and specimens, to deepen the public’s understanding of the dynamic connections between humans and nature. Through its Natural Areas Program, the Museum stewards nearly 12,000 acres of protected ecosystems across northern Ohio. A community gathering place, educational center, and research institution, the Museum is a vital resource that serves Cleveland and the nation. For more information, visit CMNH.org. 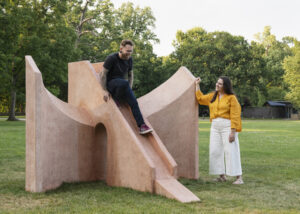