Announcing Final Group of Project Highlights for An American City

Featuring new commissions by artists including A.K. Burns and Tony Tasset in addition to an ambitious expansion of Canvas City Downtown Mural Program

These featured projects include FRONT commissions and exhibitions that expand the Triennial into public and community spaces throughout Cleveland. Further exploring the theme of An American City, these projects reflect the interest of contemporary artists in interacting with the urban landscape, with works addressing such salient topics as gentrification and community equity. Via both temporary and long-term interventions, these projects variously examine, track, and build alliances between communities and histories, offering a portrait of an American City in flux.

Together with highlights already announced for institutions and unconventional spaces, these projects contribute to FRONT's multi-part presentation that investigates the significance and meaning of staging a large-scale international triennial in the contemporary context. FRONT and its partner sites throughout Cleveland, Akron and Oberlin will bring together more than seventy local, national and international artists connecting the Great Lakes region to broader global, political and economic networks.

"The city is many things, but one primary characteristic of a city is that it is populated with strangers," said FRONT Artistic Director Michelle Grabner. "These FRONT projects seek to address the ethics of civic engagement, perpetuate pride of place, and delineate the intersection and overlapping potential of communities."

A.K. Burns will stage a sculpture made of crushed and painted chain-link fencing on the grounds of the Transformer Station. The historic building was acquired by the Bidwell Foundation and turned into a contemporary art space. This transformation was part of a first wave of gentrification in the Hingetown neighborhood of Ohio City. Situated at this epicenter, the sculpture will be in critical dialogue with various modes of local 'revitalization.' Chain-link fencing is ubiquitous, found on the periphery of construction sites, and empty lots throughout the neighborhood. Set in relief against the shifting fortunes and economies of Hingetown this work reflects not only on the role of fences locally but more broadly on how it is used to criminalize the movement of certain bodies. The Dispossessed desires to remove and re-envision these divisive constructions—displacing the fence from its partitioning function. Bent and up-ended, the newly dysfunctional object becomes a potentially beautiful form.

Since the early 1960s, English artist Stephen Willats has situated his pioneering conceptual art in participatory works that unfold beyond the conventions of an object-based art world. In particular, his work Human Right examines the relationship between personal narratives and social conditions in Middlesbrough, a mid-sized and post-industrial city not unlike Cleveland. Originally commissioned by MIMA in 2017, this multifaceted artwork shifts the relationship of the rarefied art institution to its populace. Over a six-month period, artist Stephen Willats worked with four residents, each of whom had self-organized a community facility in Middlesbrough. Willats' work is a complex constellation of interviews, large-scale photographs, system diagrams, and a series of films that were shown in shop windows surrounding the gallery during the piece's original installation. Rather than being a Cleveland-centric work, Willats' Human Right gives voice to a population who, through their community efforts, effect change.

In a project jointly developed by FRONT and the Putnam Collection of Case Western Reserve University, Chicago-based artist Tony Tasset will place his commissioned work, Judy's Hand Pavilion,on Toby's Plaza at Case Western Reserve, an open space made possible by the support of alumna Toby Devan Lewis, a local author, art curator, and philanthropist. The 34,000-square-foot plaza provides a social focal point at the convergence of the university, MOCA Cleveland, the Cleveland Institute of Art, and Cleveland's Uptown neighborhood. The sculpture will double as a dramatic public shelter and gathering spot, and will animate this crossroads as a site of continued programming during the Triennial.

Judy's Hand Pavilion is a writ large representation of the hand of the artist's wife, who is a celebrated contemporary abstract painter. Indulging in the pleasures of verisimilitude, scale, and a lustrous finish, the work critically examines the artistic traditions of appropriation, pathos, and pleasure. Brightly colored, richly narrative, playful yet satirical, the artist is best known for his large-scale sculptures that draw from the visual language of American roadside advertising.

In 2017, Lockhart represented Poland at the 57th Venice Biennale with her multidisciplinary project,Little Review, organized with National Gallery of Art, Warsaw, Poland. Created with young women from the Youth Sociotherapy Center in Rudzienko, Lockhart's project in Venice comprised translations, a film and a series of photographs, as well as educational workshops. Little Review draws its inspiration from the work of Janusz Korczak (1878/79–1942), the Polish-Jewish educator, orphanage-director, and children's rights advocate. Similar to Korczak, Lockhart's goal is to provide a forum for children's voices, both past and present.

Through film, photography, and installation, American artist Sharon Lockhart works closely with communities around the world on projects that are both socially engaged and visually complex, unfolding over extended periods of time. Celebrated for her highly conceptual practice, Lockhart's work incorporates extensive research, architecture and long-term connections with her subjects. Since 2009, Lockhart has worked with many different groups of young women throughout Poland, primarily in Rudzienko, where she has organized a variety of summer retreats and educational workshops throughout the year. Through exercises in movement, reenactment, dance, yoga, craft, cooking, writing, and performance, Lockhart encourages the girls she works with to bring forth their personal narratives.

Jan van der Ploeg will design an interior wall painting in a high traffic corridor in the Cleveland Clinic's Miller Pavilion, a crossroads for patients and visitors to the hospital and medical research institution. Working for over 20 years, van der Ploeg makes monumental abstract silhouette paintings that fundamentally alter interior spaces, playing with both perspective and reality. "His paintings expand the best of contemporary non-objective work in their sheer boldness and fearless scope, the entirety of the painting's dynamics are always greater than the architecture that supports them." Michelle Grabner, FRONT Artistic Director.

FRONT will revive Cleveland's 1973 City Canvas program, a public art project conceived by the former Cleveland Area Arts Council to stage large-scale murals. In homage to the historical role that public art has played in Cleveland, FRONT will reprise Julian Stanczak's iconic 1973 abstract mural on the same twelve-story wall on Prospect Avenue and 9th Street that was its original home. This work will act as a catalyst to introduce additional abstract wall paintings by contemporary artists: Sarah Morris, Odili Donald Odita, Kay Rosen, and Heimo Zobernig.

The Canvas City Downtown Mural Program will evolve over time, with Stanczak's historical mural executed first, and others to follow over the next three years. In addition to two executed murals, FRONT will create an augmented-reality experience for the unexecuted designs, so that visitors will be able to experience the proposed painting when visiting each of the five sites, all grouped together in the space of a few city blocks. FRONT will also produce an exhibition of all the mural designs in a downtown storefront space.

About the artists included in the Canvas City Downtown Mural Program:

Sarah Morris, born in the United Kingdom, lives and works in New York. She has developed a sophisticated architectural grammar that she applies in paintings, interior and exterior wall works. Morris' paintings, known for their distinctive use of color, streamline a way of perception as much as a virtual architecture, which is suggested through her titling. Recent international solo exhibitions include M-Museum, Leuven, Belgium (2015); Kunsthalle Bremen, Bremen (2013); Musée National Fernand Léger, Biot, France (2012); Wexner Center for the Arts, Columbus, Ohio (2012); Museum für Moderne Kunst in Frankfurt (2009); Museo d'Arte Moderna di Bologna (2009).

Odili Donald Odita, born in Enugu, Nigeria, lives and works in Philadelphia. Odita is an abstract painter whose work explores color both in the figurative historical context and in the sociopolitical sense. The Nasher Museum of Art at Duke University recently presented a solo exhibition of his site-specific installations, and his wall paintings have been included in the Venice Bienniale among other large group and solo exhibitions.

Kay Rosen lives and works in Gary, Indiana. Her early studies in linguistics influenced her practice which uses language as raw material, often in large scale interior and exterior wall paintings. For four decades, her formal and humorous interventions into written language have been defined through painted wall installations, drawings, collages, paintings, prints, and videos. She has exhibited and been collected by museums widely. She received a John Simon Guggenheim Fellowship in 2017.

Heimo Zobernig, born in Mauthen, Austria in 1958, lives and works in Vienna. His use of abstraction in the public realm extends from sculpture to interior and exterior wall painting. His abstraction often responds with a lighthearted attitude towards modes of commercial display and set design. He studied at the Academy of Fine Arts, and later at the University of Applied Arts, both in Vienna. After two visiting professorships in Germany, he has been teaching at the Academy of Fine Art in Vienna since 1999. Zobernig had solo exhibitions in 2016 at the Museum Ludwig, Cologne and the Malmö Konstall, Sweden, and presented his work in a solo presentation at the Austrian Pavilion during the Venice Biennale in 2015.

Notes to the Editor:

About FRONT
FRONT International: Cleveland Triennial for Contemporary Art is an exhibition comprised of artist commissions, performances, films, and public programs that will launch its inaugural edition in July of 2017. An American City: Eleven Cultural Exercises, in collaboration with museums, civic institutions, and alternative spaces across Cleveland, Akron and Oberlin, will showcase an ambitious roster of projects, including performance and theater throughout the landscape and built environment. With a roster of national, international and area-based artists at all points in their career, FRONT will examine the ever-changing and politically urgent conditions of an American city.

Where:
Cleveland and Northeast Ohio

Fred Bidwell is a philanthropist, collector and community leader. After a 35-year career as an advertising and marketing entrepreneur, in 2011, he and his wife established the Fred and Laura Ruth Bidwell Foundation. In 2013, they founded the Transformer Station, a contemporary art space on Cleveland's West Side. Transformer Station alternates between acting as a venue for exhibitions curated by the Bidwells from their renowned collection of photo-based contemporary art and as a venue for exhibitions organized by the Cleveland Museum of Art. Fred Bidwell served twice as board president of the Akron Art Museum and currently on the board of the Cleveland Museum of Art and on the Visiting Committee of the Allen Memorial Art Museum.

Michelle Grabner, Artistic Director
Michelle Grabner is a celebrated American artist. Her work is in the collections of the Walker Art Center, Minneapolis; Milwaukee Art Museum; Museum of Contemporary Art Chicago; DaimlerChrysler Collection, Berlin; Mudam Luxembourg; Smithsonian American Art Museum, Washington, DC; and the Victoria and Albert Museum, London. In November 2012, Grabner was selected as one of three curators to organize the 2014 Whitney Biennial in New York. She recently curated the 2016 Portland Biennial, a statewide exhibition in Oregon. Grabner is the Crown Family Professor in Painting and Drawing at the School of the Art Institute of Chicago. With her husband, Brad Killam, she co-directs the project spaces The Suburban, in Milwaukee, and the Poor Farm, in Little Wolf, Wisconsin. Grabner serves on the board of the Milwaukee Art Museum.

FRONT International Board of Directors 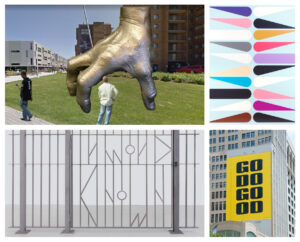