WHEN AND WHERE THEY ENTER

That’s what it says on the website for the podcast Hear Her Sports, created in 2016 by artist and former athlete Elizabeth Emery. On that podcast, Emery, a one-time top female cyclist, talks to athletes at every level of involvement, including Olympians. Emery sees sports as her way into a variety of topics that go well behind sports, particularly issues of equity, a topic she has addressed with a number of other art projects.

“It just occurred to me through a series of strange coincidences that really my entry is sports and I can talk about the bigger picture by talking about something I know,” she says. “And I think, too, sports is a really interesting place to talk about it because it mirrors everything else that’s going on in society, but in a way that’s understandable. Everybody likes to talk about sports.”

The inequity she sees in sports right now include lack of media coverage, unequal pay between male and female athletes, and the fact that not every school is adequately implementing Title IX goals--a set of reforms intended to address gender inequality in schools. Cuts in sports programs and physical education because of budget shortfalls are of particular concern in underfunded school districts.

For her work for FRONT International: Cleveland Triennial for Contemporary Art, Emery will localize the scope of her podcast. “I’m going to be talking to female athletes from the Glenville neighborhoods—which is one of the areas of focus of FRONT—starting with student athletes at Glenville High School,” she says.

The school has a storied history in athletics that has long focused on its male athletes, particularly in the football and track programs, both coached by the legendary Ted Ginn, Sr. Besides sending players into the top football colleges and the NFL, Ginn and the Glenville Tarblooders football team were even featured in a TV commercial for Stouffers’ frozen lasagna.

Emery wants to give the school’s young women a chance to be heard, as well. She will produce a weekly 20 minute-podcast available through platforms like iTunes but also at public listening stations for people without internet access, including within the Glenville neighborhood. Tentatively titled Hear Her Glenville, It will also be accessible via her website, www.hearhersports.com.

“I’ll be chatting with them, hoping to learn a lot from them about what it’s like to be a strong girl right now and also a strong girl from that neighborhood that has an incredibly rich history but has been neglected for quite a long time,” she says.

Though she laughs and says she’s scared of teenagers, she’s also excited to engage in the dialogue. A month or so ago she went to an assembly at Glenville High to meet some of the young women. “I just loved talking to them,” she says. “They seemed so smart and so aware of all of these questions that I was interested in talking about. So, I just can’t wait until we do some longer conversation.” As a 54-year-old white woman speaking to teenagers in a school that is more than 97 percent African American, she is particularly keen to study and learn from others who have engaged communities of color, immigrants, and poor residents as she embarks upon her own project.

An artist who works in multiple media, Emery hopes to create a visual element to go along with the audio, though she’s not sure what that might look like. She would like the podcast and website to stay online beyond the timeframe of FRONT, and to expand the project to other neighborhoods and other cities to keep these stories available, which she thinks is especially vital as of student activism has risen following the mass shooting in a Florida high school. “Teenagers obviously are having a greater voice right now and I think it’s important.,” she says. “They may be the ones who are the voice of truth.”

Emery says she thinks a lot about what the young women might get out of participating because she “doesn’t want to be the person coming in there and taking and not having them get something in return.”

“I certainly hope that I’m listening to them in a way that they appreciate and they’re able to tell stories they don’t normally tell and people don’t normally hear them.”

Emery already sees a few reasons to have hope that things will change in the fight for equity.

“The US soccer team and the US hockey teams stood together and legally demanded more equity and got it,” she says. “Road cyclists have recently formed a union. I'm excited to see where that leads.”

“What can be lost is that these athletes are not fighting only for salary equity but equity in the program: coaching, field time, field quality, schedules, quality team staff, insurance--and these things impact ability to play at potential. The average salary for pro female cyclists is $3000. The typical salary for pro fast pitch softball is $6000. That's a hobby.”

“I feel optimistic that women are uniting and standing together to ask for fair pay. However, sometimes I feel we are being thrown a bone. Depends on the day you ask me.”

It’s possible the young women have already started getting heard because of Emery’s work. At the assembly at the school, she learned that the concession stands are only opened during the boys’ games. She was glad to see the school’s athletic director was in the audience to hear that.

Listen to all of Elizabeth's podcasts on Hear Her Sports!

To follow along sign up for her newsletter, which comes out 1x/month, she talks about FRONT and will continue to do so throughout the process. Subscribe to Hear Her Sports on iTunes. When it starts, Subscribe to the newest Glenville podcast. 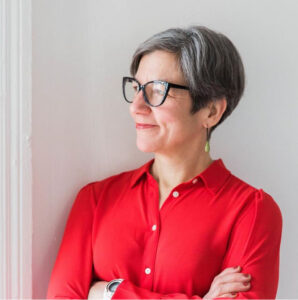 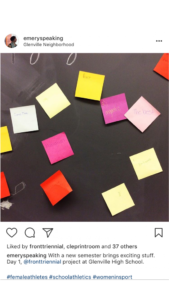