Oh, Gods of Dust and Rainbows embraces art as an agent of transformation, a mode of healing, and a therapeutic process. The title is an homage to the 1957 poem “Two Somewhat Different Epigrams” by Langston Hughes, who moved to Cleveland in his childhood and maintained an artistic connection to the region. The poem—a tender, brutal, and provocative prayer—meditates on the inseparability of joy and suffering:

I
Oh, God of dust and rainbows, help us see
That without dust the rainbow would not be.

II
I look with awe upon the human race
And God, who sometimes spits right in its face.

Amidst a time of ongoing tragedy and loss, FRONT 2022 explores how artmaking offers the possibility to transform and heal us—as individuals, as groups, and as a society. Spanning over twenty sites in Cleveland, Akron, and Oberlin, the exhibition bears witness to the region’s past and present scars, from the environmental degradation caused by industrial production to police violence and urban fracture. Yet alongside interlocking public and personal crises, healing is contemporary Cleveland’s biggest industry; furthermore, organizations such as Alcoholics Anonymous (founded in Akron) or Art Therapy Studio (one of the nation’s first such independent institutions) represent influential models for collective care. Learning from these and other local precedents, Oh, Gods of Dust and Rainbows emphasizes collaborative creative processes, working closely with institutions across the region, and connecting artists with local communities. Emerging over multiple timeframes, FRONT 2022 approaches the slow process of curating as a way to leave lasting traces upon civic and cultural infrastructures, while also embracing the ephemeral glimpses of beauty that art—like a rainbow—can still offer.

The exhibition features over 75 regional, national, and international artists working across painting, drawing, sculpture, textiles, ceramics, photography, video, text, performance, and other media. Ongoing exhibitions and public installations work in tandem with online and time-based programs. Starting with how daily practice allows individual artists to cultivate liberation through the everyday rituals of creation, the triennial also demonstrates how aesthetic pleasure—sharing joy through movement, music, craft, and color—can bridge differences between people to bring them together. Finally, the exhibition suggests ways that artmaking can speak with power: showing us how to recognize and reimagine the invisible structures that govern contemporary life.

Prem Krishnamurthy, FRONT Artistic Directors said, "After a one-year delay in these challenging times, it’s even more gratifying to witness Oh, Gods of Dust and Rainbows finally coming to life. The exhibition is a testament to the commitment and collaboration of our participating artists, partners, and communities."

Featured projects with our Presenting Partners:

Julie Mehretu at the Cleveland Museum of Art
Julie Mehretu: Portals will offer a new perspective on the Cleveland Museum of Art’s collections through an artist’s eyes. The first exhibition of its kind at the CMA, and the first time Mehretu has curated from an encyclopedic museum, Portals will integrate Julie Mehretu’s paintings with works from the museum’s many departments that Mehretu has selected and arranged. This exhibition also lays the groundwork for Mehretu’s soon-to-be-announced public mural commission in downtown Cleveland.

Renée Green at moCa Cleveland
For FRONT 2022, Renée Green (b.1959, Cleveland) has conceived Contact, a sprawling exhibition occupying all of moCa Cleveland’s public spaces, while also radiating outward as a series of programs, workshops, and screenings. Enacting Green’s durational practice of being “in relation”, Contact interweaves and places in conversation Green’s own works with an array of participants including: John Akomfrah, Marcel Broodthaers, Cinematic Migrations Workshop, Derrick Green, Indexing Imaginaries, Gabriel Kahan, Fred Moten, Suneil Sanzgiri, Jessica Sarah Rinland, Mika Tajima, as well as many others.

Kameelah Janan Rasheed at Cleveland Public Library
Kameelah Janan Rasheed will develop two community-driven explorations sited at Cleveland Public Library that show how artmaking can be an ongoing, iterative process that is continuously redefining itself. Anchored by a generative prompt, such as ‘Tomorrow there will be ______’, the group project will invite responses as infinite endings to a single sentence. Rather than content, the artist will provide a protocol for engagement, elevating the voices of young people who are not regularly invited to shape civic futures.

Jacolby Satterwhite at Cleveland Institute of Art and Cleveland Clinic
Installed both as a virtual reality arcade at the Cleveland Institute of Art and as a freestanding sculptural screen outside the new Cleveland Clinic BioRepository, Dawn starts from a question posed to residents of Cleveland’s Fairfax neighborhood: “What does utopia look like to you?” As the artist’s first public artwork in collaboration with Cleveland communities, it showcases how Satterwhite uses a combination of traditional and digital media to create unexpected new encounters.

Group Exhibition at Akron Art Museum
FRONT 2022’s presentation at the Akron Art Museum will expand upon the triennial’s overall focus upon art as a form of healing. Here, the craft and materiality of artmaking are opened up for their potential healing energies, with particular emphasis on creating transparency around artistic methods and processes. This selection of artists encompasses both local and regional figures as well as national practitioners, including: Chakaia Booker, Seuil Chung, Allana Clarke, Dexter Davis, Theaster Gates, Paul O’Keeffe, Devan Shimoyama, Audra Skuodas, Charmaine Spencer, and La Wilson.

Ahmet Öğüt at The Allen Memorial Art Museum at Oberlin College
When the Prussian army attempted to suppress the socialist insurgency in Dresden in 1849, revolutionary anarchist Mikhail Bakunin suggested an unusual defense: placing paintings from the National Museum’s collection in front of the barricades to protect the protestors. Ahmet Öğüt’s installation at the Allen Memorial Art Museum reprises Bakunin’s (unrealized) proposal using works from the Allen’s collection. Created in collaboration with the faculty and students at Oberlin College, “Bakunin’s Barricade” connects to Oberlin as historical sites of protest and political activism, probing the role that higher education plays in developing new models for society.

Abigail DeVille at The Sculpture Center
Inspired by Langston Hughes’s first book of poems for young people, The Dream Keeper and Other Poems (1932), Abigail DeVille will create a multifaceted sculptural installation that will include DeVille’s own work alongside the work of local collaborators and a wide-ranging selection of borrowed objects. Anchored at The Sculpture Center and branching into other locations in Cleveland, The Dream Keeper will explore the city’s material and cultural histories, guided by the question: Who are the dream keepers in Cleveland?

Isabelle Andriessen & Jurriaan Andriessen at SPACES
Isabelle Andriessen will present a body of her own performative sculptures—composed of animated synthetic materials that change over time, which have been shown widely in a European context—accompanied by a curatorial selection from the unfinished oeuvre of her father, Jurriaan Andriessen. His visionary work took the form of drawings, paintings, and writings that described a utopian, ecologically-balanced world called Eldorica. Highlighting how intergenerational influence allows for timely ideas to blossom, this installation represents the first time that their work is presented together.

In addition to these featured projects at our Presenting Partners, FRONT will be offering many other exhibitions and artworks across Northeast Ohio and beyond, including a bluetooth-enabled dancefloor from Swedish architecture trio Dansbana!, as well as a presentation of Chakaia Booker’s work with Curated Storefront in Akron, Cory Arcangel’s algorithmically generated score that will be played at The McGaffin Carillon at Cleveland’s Church of the Covenant and shared globally to a network of performers, a special screening of Tacita Dean’s 150 Years of Painting at the Cleveland Institute of Art Cinematheque, and many others. FRONT will be announcing details of these other projects in Oh, Gods of Dust and Rainbows in the weeks and months to come.

Additional support for the presentation at the Cleveland Museum of Art comes from a generous grant from the Louise H. and David S. Ingalls Foundation.

Fred Bidwell, Executive Director of FRONT said, “We are truly humbled by the strength of financial support from both national and local sources throughout a challenging time. I would like to thank all of our many supporters and our Board of Directors for their confidence in the FRONT initiative. In particular, I would like to thank Board Chair Helen Forbes Fields, Board members Gini Barbato, Michelle Jeschelnig and Scott Mueller and Emeritus Board Member Toby Lewis for their extraordinary personal support and advocacy.”

Launched in 2018, FRONT International: Cleveland Triennial for Contemporary Art is a free, public, contemporary art exhibition comprising artist commissions, performances, films, and public programs. The inaugural edition brought over 90,000 visitors from more than 25 countries and generated $31 million in economic impact in the region. Oh, Gods of Dust and Rainbows, the second iteration of FRONT International will run from July 16 through October 2, 2022. Building on the success of the first edition, FRONT 2022 furthers the Triennial’s commitment to the belief that by supporting creative communities and stimulating new cultural encounters in the region, contemporary art can be an important catalyst for positive social change.

Press inquiries should be directed to FRONT’s Executive Director, Fred Bidwell, at fred.bidwell@frontart.org.

Press and professional accreditation is free via the FRONT website. 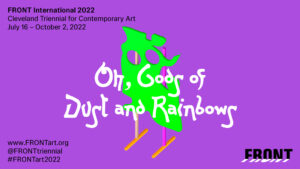