For its second edition, the FRONT International: Cleveland Triennial for Contemporary Art will feature more than 75 artists whose work meditates on the notion of healing and its many meanings.

The triennial will run from July 16 through October 2, and will be curated by team led by Prem Krishnamurthy, who has titled the exhibition “Oh, Gods of Dust and Rainbows,” a quotation from a poem by Langston Hughes, who lived in Cleveland as a child. As with the first edition, staged in 2018, this year’s FRONT International will be staged across sites in Cleveland and the nearby cities of Akron and Oberlin.

Initially, when plans for this year’s edition were announced in 2019, Tina Kukielski, the director and chief curator of the organization Art21, was named co-artistic director alongside Krishnamurthy. ARTnews has confirmed that Kukielski quietly stepped down from her post at the triennial in the summer of 2020, however. A FRONT International spokesperson said that she departed due the constraints of her job at Art21 and parenting.

With its array of artists based within the Ohio area and beyond, the FRONT International aspires to be the biggest biennial-style exhibition in the Midwest. Other biennials staged in nearby locals include the Carnegie International in Pittsburgh, the U.S.’s oldest recurring exhibition, and the Toronto Biennial of Art, which just opened this past weekend.

This edition, however, is slightly smaller in scale than the inaugural one, which included more than 100 artists. But its organizers have promised that, unlike 2018, where most of the triennial’s offerings were centered around institutions in Cleveland, there were will be more to see in Akron and Oberlin this time around.

In an interview, Krishnamurthy characterized the 2022 triennial as a “slow exhibition,” promising a significant amount of performance-based work that will be staged after the opening weekend.

“In a way, the pandemic made us realize how important it is when thinking about healing to work on the ground as much as possible,” he said. “We turned even more attention to collaborations between artists and communities.”

Among the projects he cited is one by Jacolby Satterwhite called Dawn. That work began with Satterwhite approaching residents in Cleveland’s Fairfax neighborhood and asking them, “What does utopia look like to you?” The results of that inquiry have inspired what is being billed as a “virtual reality arcade” for the Cleveland Institute of Art and a sculptural piece for the Cleveland Clinic hospital.

Also set to figure in the triennial are a Julie Mehretu–curated show at the Cleveland Museum of Art, an Ahmet Öğüt installation derived from Mikhail Bakunin’s revolutionary strategies at Oberlin College’s Allen Memorial Art Museum, a piece about monuments by Andrea Carlson that was co-commissioned with the Toronto Biennial, and an Abigail DeVille piece about Hughes’s poetry at the Sculpture Center in Cleveland. Some of these works—and many others in the show—were produced during the pandemic.

The triennial will include a number of internationally known artists—Theaster Gates, Sonia Gomes, Daniel Lind-Ramos, Nora Turato, and Yoshitomo Nara among them—alongside a smattering of locally based artists, such as Dominic Palarchio, Dexter Davis, Loraine Lynn, and Charmaine Spencer. 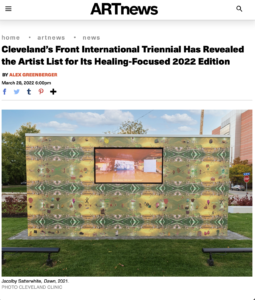