Andrea Carlson of Chicago, who identifies as Ojibwe, with her "Never-Ending Monument,'' 2022 in the foreground, and "Cast A Shadow, 2021,'' on view at the Toronto Biennial of Art opening earlier this month. Co-commissioned by the Toronto Biennial and the FRONT International: Cleveland Triennial for Contemporary Art., the works will travel to Northeast Ohio this summer.Photo: FRONT International

CLEVELAND, Ohio — The second FRONT International Cleveland Triennial for Contemporary Art, delayed for a year by the coronavirus pandemic, is on schedule and ready to open on July 16 with more than 75 artists from across Ohio and the U.S. and around the world.

With previews starting July 14, their work will be shown through Oct. 2 in coordinated exhibits held at more than a dozen venues across Northeast Ohio in displays designed to flex the region’s prowess as a center for arts and creativity, spur cultural tourism and attract attention across the world of contemporary art.

On Monday, FRONT announced the artist roster for the 10-week exhibition, along with special projects involving institutional partners including the Cleveland Museum of Art, the Museum of Contemporary Art Cleveland, Spaces, and the Akron Art Museum.

Widely known names on the FRONT exhibit list include those of Chicago artist Theaster Gates, Yoshitomo Nara of Japan, and Julie Mehretu, and Chakaia Booker of New York.

Innovations in this year’s FRONT include the joint commission with the Toronto Biennial of a work by Chicago artist Andrea Carlson. The installation, now on view in Toronto, will come to Cleveland this summer.

Northeast Ohioans with work in the show will include Dexter Davis of Cleveland, Linda D.L. Green of Art Therapy Studio in East Cleveland, Paul O’Keeffe of Cleveland Heights, and the late Audra Skuodas and La Wilson.

Launched in 2018, the inaugural FRONT attracted over 90,000 visitors from more than 25 countries and generated $31 million in economic impact across the region. Funded largely through private, foundation, and corporate donations, it cost $5 million, a price tag the show expects to exceed by $500,000 this year.

“Where we see our growth is in local communities, and the drive-in cities — Columbus, Pittsburgh, Detroit,’’ he said. “We’re spending much more time and effort raising awareness, and normalizing the idea of a triennial and letting people know what we’re doing.”

Andrea Carlson's installation, "Never-Ending Monument,'' on view at the March 25 opening of the Toronto Biennial. Co-commissioned by the FRONT Triennial, the work will be on view this summer in the second edition of FRONT.Photo: FRONT International

Bidwell and the curatorial team for what would have been the 2021 edition of FRONT announced the project’s theme in January 2020, just ahead of the COVID shutdowns that swept U.S. states two months later.

Channeling the troubles of a city and a planet suffering from climate change and social and economic divisions, they wanted to focus on healing and transformation.

The show’s title, “Oh, Gods of Dust and Rainbows,’’ came from a 1957 poem by Langston Hughes, the Harlem Renaissance luminary, and one-time Clevelander, that says:

“Oh, God of dust and rainbows, help us see That without dust the rainbow would not be.”

Visitors are invited to lounge on artist Loraine Lynn's colorful acrylic yarn creations, which sprawl over walls and the floor at Transformer Station.Steven Litt, Cleveland.com

Bidwell delayed FRONT by a year in response to the pandemic but said the theme of healing has taken on more meaning and relevance as a result of the pandemic.

“It’s been a hard three years, very hard for everyone,’’ he said. “At least now that we’re coming out on the other end of the pandemic, it feels incredibly important and relevant. We’ve been through a lot of dust, and now it’s time to look for the rainbows.”

Prem Krishnamurthy, FRONT Artistic Director said in the exhibition’s news release that, “after a one-year delay in these challenging times, it’s even more gratifying to witness ‘Oh, Gods of Dust and Rainbows’ finally coming to life. The exhibition is a testament to the commitment and collaboration of our participating artists, partners, and communities.”

- Julie Mehretu at the Cleveland Museum of Art: A first for the museum and for Mehretu, the show will integrate works by the artist with examples from the museum’s permanent collection, selected and arranged by the artist.

- Renée Green at MOCA Cleveland: Entitled “Contact,’’ the show will fill the museum and include programs, workshops, and screenings that will interweave Green’s own works with those of other participants including John Akomfrah, Marcel Broodthaers, Cinematic Migrations Workshop, Derrick Green, Indexing Imaginaries, Gabriel Kahan, Fred Moten, Suneil Sanzgiri, Jessica Sarah Rinland, Mika Tajima, and many others.

- Kameelah Janan Rasheed at Cleveland Public Library: Rasheed will develop two community-driven explorations at the library to show how artmaking can be an ongoing process that continuously redefines itself. The artist will provide protocols for community engagement that elevates the voices of young people who are not regularly invited to shape civic futures.

Ahmet Öğüt at The Allen Memorial Art Museum at Oberlin College: When the Prussian army attempted to suppress a socialist insurgency in Dresden in 1849, revolutionary anarchist Mikhail Bakunin suggested placing paintings from the National Museum’s collection in front of the barricades to protect the protestors. Öğüt’s installation at the Allen Memorial Art Museum will reprise Bakunin’s (unrealized) proposal using works from the Allen’s collection.

Abigail DeVille at The Sculpture Center: Inspired by Langston Hughes’s first book of poems for young people, The “Dream Keeper and Other Poems,’’ (1932) DeVille will create a sculptural installation that includes her own work and that of local collaborators, and a wide-ranging selection of borrowed objects.

Isabelle Andriessen & Jurriaan Andriessen at SPACES: Andriessen will present a collection of her performative sculptures — works composed of animated synthetic materials that change over time, accompanied by a curatorial selection from the unfinished oeuvre of her father, Jurriaan Andriessen. His visionary work took the form of drawings, paintings, and writings that described a utopian, ecologically-balanced world called Eldorica.

Naeem Mohaiemen at Health Education Campus of Case Western Reserve University and Cleveland Clinic: Mohaiemen’s film “Jole Dobe Na (Those Who Do Not Drown)” portrays hallucinatory dreamlike images of a man running through an endless memory loop of the last months of his wife’s life, as he moves through the empty wards of a hospital. 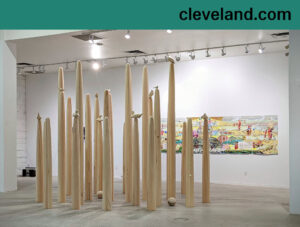 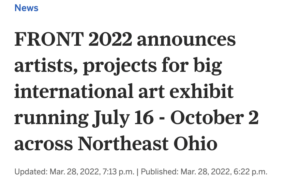