Casey Jane Ellison’s various internet-based TV series present her in the role of the glib talk show host, asking sometimes hard-to-answer questions in lightning-round form or summarizing her guests’ views in ways that seem to have little to do with their responses. In these short video pieces, she’s poking at the falseness of the format while at the same time making it something of its own—something new. Neither parody nor satire, Ellison’s interviews traffic in an inauthenticity that she hopes brushes up against something more authentic than a straightforward interrogation.

“I like to show hypocrisy,” she says, “because I want to be honest about it.”

For her work in Cleveland for FRONT, Ellison says she will be doing a one-woman show with tap dancing featuring artist Leilah Weinraub.

“I want to create a fun club vibe there,” she says of the performances planned for the Bop Stop.

The School of the Art Institute of Chicago graduate has threaded art and humor together throughout her career. She has been a serial-creator of serial internet shows, including VFILES’ WHAT THE F*SHION, UR$, Touching the Art, and her latest, MAD with Casey Ellison, which explores relationships between mothers and daughters (the M-A-D of the show’s title). With her real-life mother as her guest, her awkward talk show shtick reaches a bit of a crescendo in which the audience, and perhaps Ellison herself, is compelled to suss out what’s shtick and what’s real of the persona she inhabits. She also has a more important and ambitious agenda. “If mothers and daughters could figure out this puzzle for themselves by themselves, it would free humanity,” she told Vogue magazine. “It would change everything.”

For the show Touching the Art, she interviewed well-known figures from the art world, including the New York Times’ Jori Finkel, and posed offbeat questions and comments presented as questions, such as “I’ve always felt that art is about truth and beauty. Was I just being a dumb idiot?” and “Some say contemporary art is dumb.” When photographer Catherine Opie posits that fear is what’s behind the rejection of contemporary art, Ellison sums up with, “Art is based in fear, yes.” Her summation of an entire segment of the show could be a motto or a mantra: “My final word on the subject is that art is just like anything else, except a little more off-putting. Just give it a chance.”

“As serious as those guests are, they feel the same way (that I do). These things are hard to explain in the art world—and in the real world.”

“My service is being able to laugh about how difficult life is.”

She has chosen TV in its various formats for her own work because she finds “the concept of media so comforting.”

“I really like TV and I really like the way entertainment works. I like the forms that entertainment takes. That’s always made me feel calm in my life. I’ve always identified with that way of externalizing what’s going on inside,” she says."It’s like the process of making yourself media—becoming media—that has made me obsessed in negative ways and hopefully positive ways of my own image, and what that means out in the world.”

Tickets will open to the public June 2018 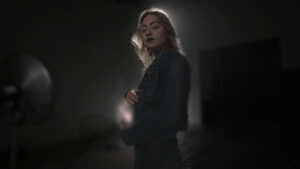