Elephant in the Room

Planning for FRONT began more than two years ago. And then the election happened.

When retired advertising executive and art collector Fred Bidwell unveiled plans for a triennial exhibition of contemporary art for Cleveland, it was three months before the presidential election that was to have reached, many people thought, an inevitable conclusion. When FRONT would take place, Hillary Clinton would be in the second year of her term, and a few left-leaning artists would likely take on an issue here and there--but it seemed likely the aesthetic pursuits of a country in the midst an ordinary crisis--neglect of the problems of the cities and the poor, the lack of justice for women and minorities, the degradation of the environment--would carry the day, and the three months of FRONT.

Instead, the election brought on extraordinary crisis, a shocking geometric multiplier of all of the challenges the nation already faced. With the inauguration of President Trump, the slow progress that had been made under President Obama appeared to evaporate, along with any hope that additional progress was on the horizon.

Suddenly, the FRONT ahead was going to be different than the one that was expected.

“Many contemporary artists are really involved in social practice,” says Bidwell, referring to the art aesthetic that concerns itself with social and political change and views engagement with various communities as both its process and product. “And there are many artists whose social practice interest is even heightened now because of the election of Trump.”

Most of those kinds of artists had a head start, working well before Trump was elected and even trying to have an impact on the campaign. In 2015, Postcommodity, a Southwest U.S. art collective, created Repellent Fence/Valla, an installation of “scare-eye” balloons featuring indigenous iconography along the U.S./Mexico border to draw attention to issues of immigration. Leading up to the election, artists Hank Willis Thomas and Eric Gottesman, hired other artists to create political ads, including billboards that were erected in Mississippi that showed the words “MAKE AMERICA GREAT AGAIN” atop an image of Congressman John L. Lewis as a young civil rights activist being confronted by the police.

But while political art from political artists is no surprise, the shadow of the election has been cast far beyond such artists.

“Trump’s election has put so much focus on social inequity, racial divisions, the heightened volume of political discourse,” Bidwell says. “A lot of artists feel they can’t ignore that. And it’s informed a lot of the work that’s being done--not just locally, but around the world.”

Bidwell says that many of the FRONT artists come from major coastal U.S. and European cities and, for them, the city’s unique position in the political process is part of its appeal.

“I think the location of Cleveland and the character of Cleveland have especially attracted the interests of artists because being a Midwestern city-- a blue dot in the center of a sea of red Ohio--that’s a very interesting thing.”

“Having a big international, contemporary art exhibition in a “non-hub” city is particularly important in this era of Trump because of the way the election panned out and how the political polarization has happened between the coastal urban areas and the center of the country. We’re right in the thick of it. The relevance of FRONT and the projects that are part of FRONT are not lost on people. I think that’s going to be really fascinating.”

The unique position of Cleveland provides an opportunity for artists to reach beyond the audiences to which they are already accustomed to reaching, and FRONT will have exhibits in places like the Cleveland Public Library and the hold of the steamship William Mather--“places that don’t have the intimidation factor of the museum front desk,” says Bidwell.

“I’m hoping that FRONT will attract people who are not in the usual demographic of the contemporary art consumer because I think it’s important that this be a more plural conversation--not just elites but reaching those who think they’re not interested in contemporary art, those who might disagree with the points of view presented. I think that would be terrific. Because I think art is a great way to convene conversations that are otherwise difficult in a safe way.”

Bidwell says that the projects within FRONT that touch on political or social issues are taking hard positions but are rather more likely to raise questions than answer them.

“I think it’s important to tell people, especially those who are less familiar with the discourse of contemporary art, that it’s okay to dislike things that you’re seeing. And that’s, in fact, normal. This is about inspiration, sure, but it is about conversation and provoking people to think fromdiff erent perspectives. That means challenging people, and I think that’s healthy,” Bidwell says.

Besides, he says, “This concept of art for art sake--something that’s purely aesthetic--is a pretty bogus idea. It’s not the world. We all live in a society that’s innately political because it has to be.” 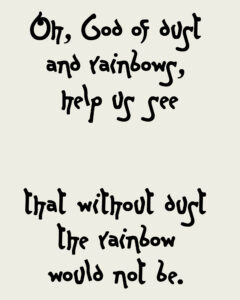