EFORE THE CUYAHOGA RIVER CAUGHT FIRE, searing into the public’s imagination an unfair but dogged metaphor for a Cleveland in decline, Tennessee Williams is rumored to have delivered a sicker burn: “America has only three cities: New York, San Francisco, and New Orleans. Everywhere else is Cleveland.” The claim isn’t entirely without truth. In 2018, Cleveland—with its deindustrialization, police violence, segregation, and purple politics—is a microcosm for “The American City,” which is in fact the subtitle of the inaugural edition of FRONT, a multimillion-dollar international triennial that hopes to make Northeast Ohio a global art destination akin to Kassel. The exhibition, dreamed up by local arts patron Fred Bidwell and curated by artist Michelle Grabner, was summed up in a (snickering?) headline in the Wall Street Journal: “Cleveland Hopes to Become the Next Venice.” The image below showed a crowd of cheering Indians fans. 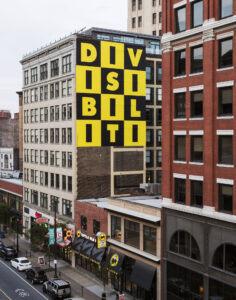