In two years, a Rust Belt version of big-time art gatherings that dot the calendar and the globe will officially launch in Cleveland. "Front International: Cleveland Exhibition for Contemporary Art" will run July 7 through September 30, 2018. That's far off, but the planning to get to today, when news of the triennial art exhibition was first made public in a New York Times report, and 2018, when the city will host what organizers hope will be a spotlight on Cleveland's role in the arts world, has been and will be immense.

Fred Bidwell, who was the interim director of the art museum in 2013 and 2014, is the main figure behind the project. According to the NYT report, he's "quietly recruited many of the city’s and region’s art museums and organizations to participate." It's a gamble, to be sure. Celebrated and historic exhibitions around the world still garner most of the attention and newcomers continue to sprout up. He hopes that by gathering some 50 international artists and holding the event in Cleveland — a little off the beaten path — well-deserved attention will fall on the city. 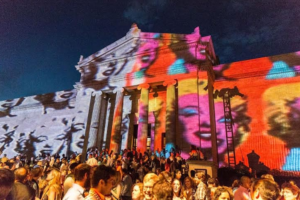