Plain Dealer: Dispatches from the FRONT Triennial: There’s still time to enjoy the big show before it ends Oct. 2

Dispatches from the FRONT Triennial: There’s still time to enjoy the big show before it ends Oct. 2

CLEVELAND, Ohio — If you haven’t yet partaken in the FRONT International: Cleveland Triennial for Contemporary Art, fear not.

As of Sunday, there are still two full weeks to enjoy the sprawling exhibition, which includes works by some 100 artists at 30 locations in Cleveland, Akron and Oberlin.

As always, plan ahead and check websites for participating institutions to see when they’re open. Most are available Thursday through Saturday, although others offer hours Tuesdays, Wednesdays and Sundays.

At one venue, the Museum of Contemporary Art Cleveland, a major FRONT exhibit will continue through Dec. 31, breaking out of the triennial’s 11-week format as part of an effort to show that FRONT aspires to become more of a constant presence in the city between its three-year cycles.

MOCA Cleveland FRONT show is “Contact,’’ a building-wide exhibit organized by Cleveland native Renée Green, an artist, and writer who works in film and installation, and who teaches at the Massachusetts Institute of Technology.

It’s her first major exhibition in her hometown and includes works by 19 other artists and collectives chosen by Green. I’ll review it after the rest of FRONT concludes on Oct. 2.

Today, I’ll offer another installment in my ongoing FRONT diary, including visits to The Sculpture Center, Spaces, and the Transformer Station gallery, all in Cleveland.

At the Sculpture Center, 1834 E. 123rd St., in University Circle, I found a large, gallery-filling installation by New York-based artist Abigail DeVille to be a rare FRONT disappointment.

Educated at the Cooper Union, the Fashion Institute of Technology, and Yale, DeVille is a highly regarded contemporary artist specializing in large sculptures and installations often comprised of “found’' materials from neighborhoods surrounding her exhibitions.

The website Art21 describes DeVille as having “a long-standing interest in marginalized people and places,’’ which she explores by creating “site-specific immersive installations designed to bring attention to these forgotten stories.”

At the Sculpture Center, DeVille created an installation entitled “The Dream Keeper,’’ inspired by the title of a 1932 book of poetry by Langston Hughes, who spent his high school years in Cleveland.

The reference to Hughes resonates strongly with FRONT 2022, which took its title and theme of art as a method of healing from a 1957 Hughes poem that includes the line, “Oh, Gods of Dust and Rainbows, help us to see That without the dust, The rainbow would not be.”

For her installation, DeVille gathered images of city maps, historical events, and African Americans who contributed to Cleveland’s development before the Great Migration from the Jim Crow south to northern industrial cities.

DeVille organized her installation to evoke a salt mine deep below Lake Erie, capitalizing on the notion of salt as a preservative. Clouds of translucent plastic are suspended over scaffolds and curling sections of chicken wire, giving the gallery a cavernous, industrial feel. Historical images flicker in rapid succession on video screens. Snowdrifts of rock salt are scattered under the scaffolding.

Yet the images flickering on video monitors appear and disappear so quickly that they can’t be grasped easily. Photocopied texts from books on African American history are fastened to scaffolding and chicken wire in ways that make them difficult to read. A loudspeaker emanates pitiful sounds of rapid and distressed breathing, which morph into something resembling the harsh, rasping sound of wood being sawn.

Deville’s piece effectively makes the point that the history of Cleveland, like that of other American cities, has been awash in racial difficulties that persist. The installation appears to insist that before one can contemplate healing, one must feel the weight and the pain of the past. Yet in exploring distressing aspects of history, the installation seeks literally to distress viewers through sensory overload.

Haseeb Ahmed, a research-focused artist based in Brussels, has filled the street-facing front room of Spaces with a quirky and delightful installation exploring the impact of wind on life in Cleveland.

An anemometer mounted above a window outside the gallery measures outdoor wind velocity and feeds data inside the gallery to motors that drive a trio of aeoliphones — the instruments used by symphony orchestras to evoke the sound of wind.

As they whir away, a series of loudspeakers amplifies the voices of anonymous Clevelanders, who narrate harrowing experiences with wind and storms on or near Lake Erie. A video camera captures images of a rotating architectural model, affixed to the gallery ceiling, that was once used in wind tunnel tests.

Ahmed’s marvelous installation combines science and emotion in what amounts to a wonderful, offbeat celebration of Cleveland’s sense of place as a city on a Great Lake.

Another gallery centers on “Wild Relatives,’’ a powerful and stunningly beautiful, hourlong 2018 film by Berlin-based Jumana Manna, which focuses on the repatriation of seeds from an underground seed vault in remote Svalbard, in the Arctic Ocean, to post-civil war Syria.

The film’s low-key narrative style combines meditations on the fate of the Earth amid war and climate change with images of agrarian life in a Syrian village. It connects two wildly different landscapes that are linked through the preservation of seeds as a vital source of life.

Manna’s film is accompanied by a series of collages of idyllic landscapes made by the artist from snippets of plastic labels clipped from containers of cleaning products. The works exploit the contrast between cliché images of landscapes and floral bouquets with chemical products designed to evoke a phony, synthetic “freshness.”

The main gallery inside Spaces is devoted to scary-looking automata created by Dutch sculptor Isabelle Andriessen, which recall monsters in the Aliens movies of Ridley Scott. Andriessen’s metallic creations, trailing braided steel houses, ooze mysterious blue and orange fluids that crystallize on a metal pan or on the gallery floor.

The sculptures are accompanied by a collection of never-before-exhibited drawings and prints of dystopian, impossibly dense cityscapes by Andriessen’s father, artist, writer, and composer Jurriaan Andriessen (1925-1996).

Spaces’ participation in FRONT is rounded out by a long-term project involving the London-based collective, Cooking Sections. The collective aims to collaborate with local farms in Northeast Ohio to find ways to reduce algae-producing runoff in Lake Erie. A pair of oxygenating fountains on view at North Coast Harbor through October 2 is a visual manifestation of that effort.

Just a block south of Spaces, at 1460 W. 29th Street, the Transformer Station gallery, is playing a role as the FRONT Triennial’s ground zero.

In response to critiques that the inaugural edition of the triennial 2018 lacked a true center, this year’s version (delayed a year by the coronavirus pandemic) functions as a FRONT sampler, with representative pieces representing the exhibit as a whole. It’s also a great show, just on its own.

On view are three outstanding metal and plastic sculptures by Cleveland Heights artist Paul O’Keeffe, created as a way to grapple with the death by suicide of his son, Christian, in Kent 10 years ago.

Inspired by poems and writings left behind by Christian, and united by the color blue, the sculptures are somber and austere meditations on the artist’s imperative to strive for healing in the face of grief and loss. They form a core part of this year’s FRONT.

So too do the almost painfully austere paintings of the late Audra Skuodas, the important, Oberlin-based artist whose work combined stark, flat fields of color or pattern with abstract evocations of Christian stigmata and images of contorted, attenuated female bodies gripped by pain.

In “Grasping Infinity,’’ a 2000 painting installed effectively in a second-floor space at the Transformer Station, depicts a woman’s slender, disembodied hand hovering in haloed light in a vast, field of blood red. The hand holds a pea-sized dot between the thumb and forefinger as if it were a tiny embodiment of a universal truth.

Responding to such works in the show, The Art Newspaper, based in London and New York, predicted that Skuodas, viewed primarily as a Northeast Ohio artist before her death in 2019 at age 78, “now seems poised for a wider breakthrough.”

Other works by Skuodas, who was married to the late John Pearson, a professor of art at Oberlin College, are on view at the Akron Art Museum as part of FRONT. Visits to Skuodas’ studio in Oberlin can also be arranged through the Triennial

Perhaps most prominently, the Transformer Station is the location of a massive sculptural installation created by New York-based Sarah Oppenheimer, and Tony Cokes, based in Providence, Rhode Island.

Their project includes two hollow rectangular beams of black-painted steel and aluminum mounted amid towers of X-braced aluminum trusses that rise 24 feet to the gallery ceiling.

By spinning the heavy beams on their precisely geared mounts, viewers can activate belts inside the towers that act like pulleys to raise or lower an elaborate system of digital projectors and screens on the gallery walls to block or reveal fragments of writings by the Colombian novelist Gabriel Garcia Marquez, selected by Cokes.

The installation plays with the idea of redaction, inspired by recent news stories about heavily black-out documents from the Trump-Russia investigation and other political scandals.

Beyond that, however, the Cokes-Oppenheimer installation stands as an invitation to touch and interact with an amazing sculptural machine whose heavy metal beams can perform a slow dance of mass and motion when pushed by viewers.

So go ahead. Spin the beams. If you haven’t, you’ll be missing out on a unique aesthetic experience that can only be had for the next two weeks, as part of FRONT 2022. 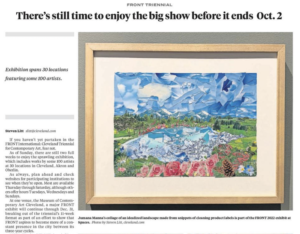