FRONT International: Cleveland Triennial for Contemporary Art is a contemporary art exhibition connecting local, national, and international artists with institutions across northeast Ohio. The 2022 edition, Oh, Gods of Dust and Rainbows, presents art as a possible catalyst for healing. As a part of FRONT International 2022, the Ellen Johnson Gallery at the Allen Memorial Art Museum now hosts Bakunin’s Barricade by Ahmet Öğüt, a Turkish-born conceptual artist currently living and working across Amsterdam, Berlin, and Istanbul.

“The Allen has been one of the key partners since the start of FRONT International,” Director of the AMAM Andria Derstine said. “In terms of this particular presentation, Ahmet Öğüt’s work was suggested to us by the artistic director of FRONT. I loved the fact that it dealt with historical and contemporary ideas about protest. I also loved that it involved original artworks from our collection interspersed within the barricade.”

AMAM Curator Sam Adams commented that FRONT selected Oberlin as the site for this piece “because of Oberlin’s history of counter-culture and political justice and the strength of our collection to be able to sustain a project like this.”

Öğüt has been creating and presenting Bakunin’s Barricade works in various international museums since 2015. The project is based on a concept introduced in 1849 by revolutionary anarchist Mikhail Bakunin. As Prussian troops threatened to attack socialist groups in Dresden, Bakunin proposed enforcing their barricades with artworks from the National Museum. He theorized that the value of the paintings would dissuade the troops from their attack.

Although this concept was never realized by Bakunin, over 150 years later Öğüt was inspired by the idea and began creating barricade installations reinforced with works from each museum’s collections. Öğüt uses found objects including fencing, cars, construction materials, and signs to build up his site-specific barricades. At the AMAM, an Oberlin street sign is one of the many items that comprise the expansive installation.

Placed throughout the barricade are 13 works selected from the museum’s collection, including recognizable Andy Warhol, Barbara Kruger prints hanging on a fence, and even a Nisse Zetterberg portrait of the gallery’s namesake, Ellen Johnson. The presentation of the barricade is accompanied by a framed, unsigned contract stipulating that, if signed, the art dispersed throughout the assemblage may be deployed by the public, if needed, to form a barricade during a social protest.

“Ahmet was really inspired by the 2013 Gezi Park protests in Istanbul, as well as Occupy Wall Street, Black Lives Matter, and all of the protests on any number of tragic and important issues in recent years,” Derstine said.

To the Oberlin community, the AMAM is a resource, a space for education and inspiration. The connection between the artwork and the museum’s legal process is an illuminating and topical component of the installation. In an era of digital contracts and digital art, a physical contract hung before a physical artwork is worthwhile subversion.

Bakunin’s Barricade poses the question, “Can art defend society?” and prompts reflection on the value of art as protest.

“Art museums as institutions tend to be risk averse because it is part of our mandate to protect and serve our art collection in perpetuity for future generations,” Adams said. “A museum has to walk a fine line to be able to meet its moment and participate in the forward drive for social justice.”

Of course, the current installation and unsigned contract for Bakunin’s Barricade poses no threat to the AMAM’s collection, but a museum setting can have a deep connection to protest movements. Art institutions are often platforms for works that challenge political systems and social inequalities. Protests have also been directed towards art institutions in recent years, demanding systemic reform and increased diversity in creative spaces.

This concept of leveraging art for political action can be compared to the climate activists in the Italian group Ultima Generazione (Last Generation) who have glued their hands to acclaimed works of art in recent months. Their hope is that the radical action of putting valuable works of art at risk may catch the attention of policymakers. Similar to Bakunin and Öğüt, they seem to believe that revered art is often held in higher regard than the livelihood of human beings.

In a time of digital activism with growing desire to take discourse online, many argue that the intangibility of the internet dampens the effects of protests. Bringing an exploratory artwork into physical spaces is effective in fostering dialogue in communities where protest is often misunderstood and misrepresented — and for Bakunin’s Barricade, the installation is a cross-generational triumph of art as protest. 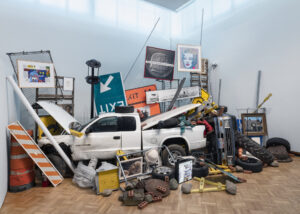