The first edition of FRONT International: Cleveland Triennial for Contemporary Art generated over $31 million in economic impact in Northeast Ohio according to results of the region-wide summer-long event released today.

FRONT Triennial was held July 14-Sept. 18. Numerous sites across Northeast Ohio hosted art exhibitions throughout that period, garnering sales of $115 million and generating more than $8 million in state and local taxes, according to the impact study by Cleveland State University’s Center for Economic Development.

Those exhibition sites were also buoyed by a 20 percent increase in activity compared to 2017, with visitors coming from over 25 countries in the Americas, Europe and Asia.

“One of the primary objectives of FRONT is to bring new economic activity to Northeast Ohio through cultural tourism,” said Fred Bidwell, executive director of FRONT. “We were very pleased to see that 34 percent of visitors to FRONT exhibitions came from outside of Northeast Ohio, and during our opening week, over 50 percent were from out of town.”

The CSU study indicates the outsized impact of the area’s arts and culture institutions on the area economy.

“We know that when people come to Cleveland, they are impressed by the city, its institutions and attractions, and its terrific visitor amenities,” said David Gilbert, president and CEO of Destination Cleveland. “We are proud to support events like FRONT that present the region at its best, and we know that many of this year's visitors will want to come back in 2021.”

Strength in the Arts

Bidwell attributes much of FRONT’s success to the strength of its artistic program, which was directed by renowned artist and curator Michelle Grabner and included work by over 114 artists from around the world.

FRONT mounted an extensive schedule of education and community engagement programming in the year leading up to the exhibition. FRONT and its partners originated over 290 programs and events from October 2017 through September 2018, including films, lectures, conversations, performances and tours. Community engagement events alone had an estimated 10,000 attendees.

“Beyond the positive economic impact FRONT is bringing to Cleveland, it has garnered well-deserved recognition for the region’s exceptional arts and cultural resources,” said Barbara R. Snyder, president of Case Western Reserve University, “It was a great pleasure to serve as a participating partner in FRONT and to see how the combined contributions of its partners brought new appreciation of both the quality of our institutions and the city as a cultural and intellectual hub.”

FRONT would not have been so successful in its first year without the help of participating partners, community partners, grassroots organizations, individuals, foundations, government entities and corporations. Among those is PNC, which provided funding to repurpose two historic buildings in the Glenville neighborhood to create the PNC Glenville Arts Campus. The campus housed numerous FRONT events, such as talks with artists.

“Initiatives such as FRONT are very much in line with our commitment to engage, support and connect neighborhoods and local residents through the arts,” said Paul Clark, PNC regional president for Cleveland. “We see FRONT as an opportunity to improve the quality of life through creativity and innovation in Cleveland and across the region.”

FRONT Exhibition Company is already in the process of planning the next edition of the Triennial, which will open in July of 2021.

“We are pleased that the grand collaboration between Northeast Ohio’s extraordinary arts and culture institutions will continue,” said Bill Griswold, director of the Cleveland Museum of Art. “We fully expect that the FRONT Triennial has the potential to become a lasting arts institution for the region that increases in equity and impact over time, further enhancing the prosperity and reputation of the participating institutions and the region as a whole.”

“The next Venice? Cleveland steps up...the world’s next hotbed for contemporary art.” – The Wall Street Journal

“...a global exhibition in the making.” – The Cleveland Plain Dealer

“With the debut of FRONT, this Rust Belt city shines anew.” – Architectural Digest

"A dialogue that contains all voices.” – Smithsonian Magazine

“...a complex undertaking....” – The Architect’s Newspaper

FRONT International: Cleveland Triennial for Contemporary Art is a Triennial exhibition comprised of artist commissions, performances, films, and public programs that launched its inaugural edition in July of 2018. An American City: Eleven Cultural Exercises, in collaboration with museums, civic institutions, and alternative spaces across Cleveland, Akron, and Oberlin, showcased an ambitious roster of projects, including performance and theater throughout the landscape and built environment. With a roster of national, international and area-based artists at all points in their career, FRONT examined the ever-changing and politically urgent conditions of an American city. The next edition of FRONT will take place in Cleveland and Northeast Ohio in summer 2021. 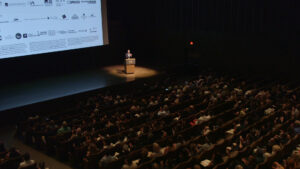