The Architect's Newspaper: SPACES surveys our deep entanglement with plastic as commissioner of the U.S. Pavilion at the 2023 Venice Architecture Biennale

SPACES surveys our deep entanglement with plastic as commissioner of the U.S. Pavilion at the 2023 Venice Architecture Biennale

Late last month as the 2022 edition of Cleveland’s FRONT International art triennial began to wind down, a dispatch published by Forbes wondered if Ohio’s second-most populous city, oft-overlooked but blessed with a historically robust arts scene, is poised to become “the next Venice” as it continues along a remarkable comeback path shared by other once-down-and-out Rust Belt burgs. Yet as Paul Mosley wrote for AN, the “more relevant ambition of FRONT lies in the transformative potential of art to fortify and restore local communities, not to make Cleveland the next Venice.”

Whatever the case, something is indeed brewing along the southern shore of Lake Erie—a potent cultural force that has helped to land a venerable Cleveland arts organization in La Serenissima itself for a key role at the forthcoming 18th edition of the Venice Architecture Biennale.

As first revealed this past weekend in local Cleveland media and formally announced this morning, SPACES, a nonprofit alternative arts organization first established in 1978 as an experimental, artist-run gallery space, has been selected by the U.S. Department of State’s Bureau of Educational and Cultural Affairs, aided by the National Endowment for the Arts, to serve as commissioner of the United States Pavilion at the 2023 Venice Architecture Biennale. Tizziana Baldenebro, executive director of SPACES, and Lauren Leving, curator at the Museum of Contemporary Art Cleveland, will serve as cocurators.

In addition to establishing a Cleveland-based presence in Venice, the selection of SPACES as commissioner of the U.S. Pavilion in Venice continues a tradition of organizations from the American Midwest stepping into a major curatorial role at the Venice Architecture Biennale, most recently for the 2021 edition in which Paul Andersen and Paul Preissner of the University of Illinois at Chicago served as cocurators of the U.S. Pavilion with their American Framing. Two Chicago-based institutions, School of the Art Institute of Chicago and the University of Chicago, also served as commissioners for the U.S. Pavilion at the 2018 Venice Architecture Biennale.

While Andersen and Preissener’s American Framing (which is currently on tour, and will be staged at the Palm Springs Art Museum beginning early next year) paid tribute to the uniquely American embrace of wood-framed construction, Baldenebro and Leving’s theme explores the not-so-uniquely American embrace of plastic, the manufacture of which has helped to keep Ohio’s economy buzzing for decades. As noted in a press release, the exhibition, entitled Everlasting Plastics, will explore the world’s unrelenting reliance on petrochemical-based materials by inviting visitors to the U.S. Pavilion to “reframe the overabundance of plastic detritus in our waterways, landfills, and streets as a rich resource.”

“As the climate crisis becomes a tangible reality, our daily objects must be agents of change. This exhibition brings together a range of practices that are examining, salvaging, and upending a global calamity,” explained Baldenebro in a statement.

Bringing Everlasting Plastics to life will be site-specific works by five artists and designers: Xavi Aguirre, Assistant Professor of Architecture at the Massachusetts Institute of Technology; Detroit-based designer Simon Anton; Ang Li, assistant professor at the Northeastern University School of Architecture; Norman Teague, assistant professor at the University of Illinois at Chicago School of Design; and Cleveland-based sculptor Lauren Yeager. These works, according to the curators, will “invite a discussion about the ways that plastics both shape and erode contemporary ecologies, economies, and the built environment, while also suggesting possible alternatives and necessary re-imaginings for the ways in which plastics are deployed.”

“This exhibition interrogates our toxic chemical relationship with the material to suggest new ways of framing our dependency to it,” elaborated Leving.

In addition to the show itself will be a series of talks, workshops, student courses, and more that “draw parallels between Ohio’s largest industries, and the plastic waste accumulating on the banks of the Venetian Lagoon, connecting communities most affected by plastic production, pollution, and environmental mismanagement,” per the curatorial team.

Everlasting Plastics will debut at the U.S. Pavilion, a 1930 Palladian-style structure on Venice’s Giardini designed by William Adams Delano and Chester Holmes Aldrich, beginning May 20, 2023. It will remain on view through the run of the 2023 Venice Architecture Biennale, which concludes November 26, 2023. As announced last December, the curator of the forthcoming Venice Architecture Biennale, titled Laboratory of the Future, is Ghanaian-Scottish architect and academic Lesley Lokko.

AN will circle back with more insight and details as the 2023 Venice Architecture Biennale draws closer. Further updates on the exhibition and participating artists will also appear on the Everlasting Plastics Instagram account. 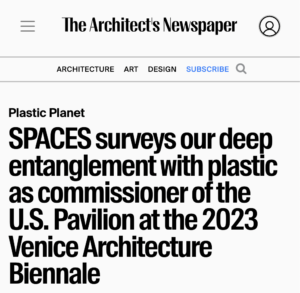