Artforum: STATE OF REPAIR Colby Chamberlain on the FRONT Triennial

Artforum: STATE OF REPAIR Colby Chamberlain on the FRONT Triennial

LEARNING ABOUT A CITY through Zillow warps your sense of the landscape. Filtered searches dissolve the edges of neighborhoods and flatten monuments. When my partner and I visited Cleveland this past May, after endless hours of browsing real-estate listings, neither of us took notice of Terminal Tower, once the tallest building in North America outside New York, or knew where to locate the Guardians of Traffic, the stirring Art Deco colossi that stand watch over the Cuyahoga River. We did, however, immediately recognize Church + State, the boxy, checkerboard-colored development that anchors the northeast corner of the Ohio City neighborhood. Among all the ostentatiously trendy buildings on Zillow, Church + State had caught our attention for its conceit of naming units after theorists and philosophers: the two-bedroom Foucault, the Sartre studio. The decision seemed so bizarre. Surely, anyone with an appreciation of these thinkers would find the appropriation off-putting. But here were marketers betting big money that the veneer of critique could be just as useful to their brand as the craft brewery on the complex’s ground floor.

Should I have been surprised, then, to learn that Transformer Station, the “hub” of the FRONT Triennial, lay kitty-corner from Church + State, not far from a beach-volleyball bar and a Masonic Temple that has been converted into a rock-climbing facility? The discovery shaded my expectations for “Oh, Gods of Dust and Rainbows,” the exhibition’s second iteration, organized by artistic director Prem Krishnamurthy and a team including Evelyn Burnett, Courtenay Finn, Tina Kukielski, Emily Liebert, Kameelah Jana Rasheed, Tereza Ruller, Murtaza Vali, and Annie Wischmeyer. Check the website of any recently established big-tent exhibition and you are bound to find two distinct languages: curatorial statements that explain how commissioned artists have “interrogated” conditions or “unearthed” forgotten histories and, on a separate page, consultant-prepared estimates of the show’s financial impact. “[FRONT’s] inaugural edition, An American City, which was curated by Artistic Director Michelle Grabner, generated over 90,000 visitors from more than 25 countries and brought $31 million in new economic activity to the region.” Transformer Station and Church + State turned that dichotomy into a geography lesson. Rigorously critical art on one side of the street and, on the other, a lifestyle dorm for the creative class.

Yet once inside Transformer Station, I found a much messier, more earnest, and openly uncertain interplay between FRONT’s artistic program and its economic agenda. “How can an exhibition reveal the relationships that led to its making?” asked the opening wall text, in effect promising that the works therein would offer a précis of the entire triennial, which stretched across Cleveland, Akron, and Oberlin. Paul O’Keeffe’s steel-and-Plexiglas sculpture In Memoriam (I Wanna Be Pure) 2020–21, combined the pared-down forms of midcentury formalism with texts referencing the untimely death of the artist’s son. Martin Beck’s Last Night, 2016, meticulously reconstructed the playlist for the final party at the Loft’s 99 Prince Street location in June 1984. Blown-up photographs reproduced key passages from Audre Lorde’s “The Uses of the Erotic: The Erotic as Power” (1978), Barbara Ehrenreich’s Dancing in the Streets: A History of Collective Joy (2006), and Richard Sennett’s Together: The Rituals, Pleasures, and Politics of Cooperation (2012). A separate room held artworks, posters, and press clippings from Cleveland’s Art Therapy Studio. The proposition that emerged from these groupings goes like this: Instead of disavowing the exhibition’s civic boosterism, FRONT would recast it as one facet of a more holistic approach to “healing” a region burdened by trauma. Cleveland is a Rust Belt city recovering from both the decline of its robber-baron heyday and the wreckage that heyday left behind. Amid segregated neighborhoods and polluted waterways, art can do more than drum up tourism or attract tech start-ups. It harbors resources for individual solace, communal bonding, and even some measure of environmental restoration. A cautious faith in art’s transformative capacities flickers through the exhibition’s title, drawn from a 1957 epigram by onetime Cleveland resident Langston Hughes: “Oh, God of dust and rainbows, help us see / That without dust the rainbow would not be.”

What are the limits, possibilities, and pitfalls of privileging repair over criticality in a place like Cleveland?


Additional questions were posed by each venue: “How can an artwork slow down the fast pace of consumption and make us look deeper?” “What can storytelling, as narrative and performance, teach us about health care, healing, memory, trauma, and grief?” “How can a musical structure connect humans across time and space?” The most easily defensible answer to all these queries is “It can’t.” In some circles, an exaggerated eye roll might also suffice. A dicier but more rewarding response would be to approach FRONT as a proving ground for the “reparative turn” so beautifully heralded (and recently celebrated in this magazine’s sixtieth-anniversary issue) by Eve Kosofsky Sedgwick: “What we can best learn from such practices are, perhaps, the many ways selves and communities succeed in extracting sustenance from the objects of a culture—even of a culture whose avowed desire has often been not to sustain them.” What are the limits, possibilities, and pitfalls of privileging repair over criticality in a place like Cleveland? Patricia Stuelke’s portrayal of the reparative turn as covert neoliberalism in The Ruse of Repair (2021) is too blindly polemical to persuade, but that doesn’t entirely discredit the allegation. Just as Sartre’s critique of dialectical reason can fade into the floor plan of a luxury apartment, Lorde’s insistence on self-care can devolve into the drivel of Instagram sponcon.

Ohio City, on the west bank of the Cuyahoga, supplies Cleveland’s most picturesque illustrations of gentrification. Vegan ice cream! Tattoo parlors! Fixer-uppers! But to truly see wealth accumulation and racialized dispossession at work, you must travel east, where poor, predominantly Black neighborhoods abut the campus of Case Western Reserve University, the museums clustered around Wade Oval, and the megablock pavilions of the Cleveland Clinic, Ohio’s largest private employer. Healing is big business, and as disability activist Marta Russell trenchantly argues in Beyond Ramps (1998), perceptions of altruism often mask its profiteering and abuse. At the cinematheque of the Cleveland Institute of Art (my new employer), the uneven power dynamics that pervade sites of care were on rancorous display in the Tavistock group-therapy session documented by Leigh Ledare’s excruciating, engrossing feature-length film The Task, 2017. Wong Kit Yi transformed a blandly corporate Cleveland Clinic office into a makeshift karaoke parlor for her video Inner Voice Transplant, 2022, which recounts the details of a surgical procedure pioneered at the hospital while actively questioning modern medicine’s reductive definitions of healing and cure. Outside the entrance to the Cleveland Clinic BioRepository stood Dawn, 2021, the outcome of a collaboration between Jacolby Satterwhite and residents of nearby Fairfax that began with a prompt: “What brings you solace, peace, or hope? What are your dreams for the future?” Satterwhite turned the drawings and notes he received back into material for a boisterous animation of a maypole ritual, which played outdoors on screens set within a freestanding partition wrapped in matching wallpaper. Maybe this occurred to me because Renée Green named her exhibition at the Museum of Contemporary Art Cleveland “Contact,” after the 1997 Jodie Foster film about interstellar communication, but I couldn’t help but see Satterwhite’s video monument as the monolith from 2001: A Space Odyssey done up for the ballroom—not an austere minimalist plinth transmitting a one-way message, but an attempt to leverage joy and festivity to bridge a divide.

From Satterwhite’s Dawn, I drove farther into Fairfax to see Abigail DeVille’s “The Dream Keeper,” a community garden populated by haunting figurative sculptures fashioned from mannequins, plaster casts, chicken wire, obsidian, quartz, discarded bicycle wheels, and old suitcases. En route, I pulled over unexpectedly to marvel at a roadside ensemble of monster-truck metal constructions made, I later learned, by microcelebrity Tim Willis, who drives his robot contraptions in local parades. The similarity between these two instances of “yard art” was not entirely coincidental. One of FRONT’s great feats was its recognition of the reparative impulse running across bricolage, assemblage, outsider art, folk art, and craft—categorizations determined more by an artist’s race, class, education, and cognitive ability than by a piece’s formal characteristics. Along with DeVille’s “Dream Keeper,” Diana Al-Hadid’s 2022 fountain for the Syrian Cultural Garden in Rockefeller Park, and 1994–2022 collages by Dexter Davis located in multiple venues, this aesthetic of repair was most cogently presented in a group show at the Akron Art Museum, curated by Vali, that brought together works by Chakaia Booker, Theaster Gates, Dominic Palarchio, Judith Scott, Audra Skuodas, and Charmaine Spencer. “The desire of a reparative impulse . . . is additive and accretive,” writes Sedgwick. “It wants to assemble and confer plenitude on an object that will then have resources to offer to an inchoate self.”

FRONT also placed considerable emphasis on the reparative powers of music. A computer program by Cory Arcangel activated the carillon bells at the Church of the Covenant each day at noon. Lenka Clayton and Phillip Andrew Lewis’s video Five Hundred Twenty-Four, 2022, convened twenty-odd local choirs to perform the same joyfully interminable score. Tony Cokes’s video on the use of music in torture appeared, appropriately enough, on a television monitor in the lobby of the Rock & Roll Hall of Fame. The former reading room of the public library’s main branch echoed with the unpredictable sounds of Jace Clayton’s 40 Part Part, 2022, a variation on Janet Cardiff’s Forty Part Motet, 2001. Like many native New Yorkers, I vividly remember Motet’s debut during the wretchedly beautiful fall of 2001 at MoMA PS1, where you could stare out at the Manhattan skyline while circling the installation to hear each channel of Thomas Tallis’s soaring choral arrangement. Clayton’s version shares the physical setup, but its forty speakers remain silent until visitors connect to them via Bluetooth and play music off their phones. An algorithm spatializes their selection so that the tune wavers and shifts around the room. If circumstance made 40 Part Motet a scene of secular solace in post-9/11 New York, could 40 Part Part fulfill a similar role for post-Covid Cleveland? Since moving here, I have frequently heard the lament that the pandemic drained downtown of all its energy. In 2020, so many of us upped our intake of streaming content as a weak substitute for the pleasures we used to take among others, and now we remain stuck in those unsatisfying habits—podcasts, Spotify, a half-dozen TV subscriptions. The marketing team at Church + State probably has some spiffy plan to buck the trend, but I prefer Clayton’s strategy of making private consumption public. There’s an effervescence that arises from letting one’s headphone fare bounce off the marble of a Beaux Arts hall. Like Satterwhite’s Dawn, 40 Part Part invites contributions and then provides the platform to amplify them. Our sources of sustenance become tools for repair when they are shared.

Colby Chamberlain is faculty in residence at the Cleveland Institute of Art. His book Fluxus Administration is forthcoming from the University of Chicago Press. 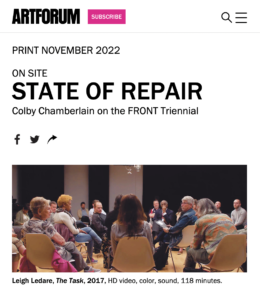