Michael R. Jackson and Jacolby Satterwhite on Making Art in a Shifting Culture

Two creative people in two different fields in one wide-ranging conversation. This time: the playwright behind

“A Strange Loop” and the visual artist.

Although the playwright Michael R. Jackson, 41, and the visual artist Jacolby Satterwhite, 36, work in different genres, they have some things in common. Both are queer Black New York-based artists who address trauma, secrets and stigmas. And both have spent most of their careers feeling overlooked and misunderstood. “As the Black gay man in the room,” said Satterwhite, “I was seen as some sort of weird exception and dismissed.”

Yet since the summer of 2020 and its global protests against racial discrimination and violence, both men have been enthusiastically embraced by the public. “A Strange Loop,” Jackson’s meta-musical about a queer Black man trying to write a musical, won the 2020 Pulitzer Prize for Drama, making its author the first Black writer to win the award for a musical. The production moved to the Lyceum Theatre on Broadway two years later and was nominated for 11 Tony Awards, including that for Best Musical (which it won).

Next spring, Jackson’s new musical, “White Girl in Danger,” set in the world of a fictional soap opera town called Allwhite, will open off Broadway. The playwright was born and raised in Detroit and spent nearly 20 years on “A Strange Loop,” taking a variety of jobs to support himself, including as an usher at “The Lion King” on Broadway.

Satterwhite, whose work has been shown at New York’s Museum of Modern Art and Whitney Museum of American Art, hopscotches across mediums — photography, performance, painting, 3-D animation, writing — to create art that raises questions about self-mythology and expression, consumerism, labor, visual utopia and African rituals. His practice defies easy categorization. This year, the South Carolina native has been building multimedia installations around the world, including at the Format music and art festival in the Ozarks, the Front International triennial in Cleveland, the Munch Triennale in Oslo and the Okayama Art Summit in Japan.

The two artists met in August for a conversation at Satterwhite’s studio in Bedford-Stuyvesant, Brooklyn, to discuss their experiences in a shifting cultural landscape.

JACOLBY SATTERWHITE: On the night “A Strange Loop” premiered, I had a lot of projects going on and wasn’t able to make it but, three times a week, someone would approach me about it. I went in a little skeptical and thought, “I’m probably going to see something that is asymmetrical to my experience.” But what was so great about it was that it encapsulated all the things that make me who I am as an artist and how I feel as a creative producer in an art world that has shifted seismically between 2003 and now. I was in the room before we all got a seat at the table, and I experienced all kinds of resistance among white peers, as well as my own Black colleagues who have a heteronormative stance.

MICHAEL R. JACKSON: I think part of the reason a lot of people connect with the show is because this piece contains almost 20 years of thought. I started working on it when I was about 23 and, even though I rewrote it, it still captures whole periods of time of Black gay thinking, feeling and living and reflecting. There’s a lot that one can grab on to.

J.S.: I went to see the show with my boyfriend, who is not in the art world or a creative industry. There are times when I struggle to communicate why I am the way I am, and I’ve said things that were a bit niche and esoteric to him with regard to my experience. And there were moments during the show when he looked at me, because the scenes illustrated exactly what I said to him.

M.R.J.: In a weird way, the show demonstrates my inherent outsider status that makes me incompatible with being in a relationship.That could be wrong — I could be overdramatizing — but that’s one of the loops in my life.

J.S.: Before I started dating this person, I had this “I am meant to be alone” militancy. And honestly, I do feel like I have more agency when I’m alone, because I have an obsessive practice that requires me to be extremely selfish to execute. I don’t have assistants. I’m a computer animator, a painter and an experimental filmmaker, and it requires a certain kind of loneliness.

M.R.J.: Yeah. One important lesson I learned about myself during the pandemic was that my instinct is far more “I” than “we.” I’ve always thought of myself as a collectivist, and it’s not that I’m not sympathetic to groups but, if I track my own actions and choices, it was always me: whether it’s me against my family, me against other Black folks, me against white folks. Whatever group it was, I always had to find a way to soldier through the group within my own “I.”

J.S.: I actually share a similar sentiment. As a person who grew up with childhood cancer — twice — had chemo and was isolated from a schizophrenic mother who was in a mental hospital, I’ve always felt everything about my identity was broken. So in order to survive, I found solace in my artistic ambitions. Exploring niche illegibility and abstraction as a Black artist is radical and unpopular, and it was one thing that people scoffed at for my whole career. But the boldness to commit to something that’s illegible and unpopular is rewarding, and it actually has more impact on the collective “we.”

M.R.J.: My next musical, “White Girl in Danger,” is very much about the “we.” Now there’s a relationship between the “I” and the “we,” but the world is going, “Representation! Representation! Representation!” I’m like, “What is that?” That doesn’t feel true. I mean, you’re putting up what you want to see, and that’s fine. But then you want to try to sell that back to me, and I’m not giving you my money for that. That’s what I find troubling about [the focus on] representation, which is dissonant with what a lot of our culture has been saying for a couple of years.

J.S.: Well, capitalism got in the way, and now you have banks saying, “We have money for trans visibility and we create safe spaces at our A.T.M.s,” or whatever.

M.R.J.: You saying that has me thinking about [the 1990 documentary about New York City drag culture] “Paris Is Burning.” What’s actually been most interesting to me, but doesn’t get talked about, is that the group of people in that documentary — and so many more who weren’t in it — were imitating an imitation of an imitation in the Reagan era. All these people in the 1980s were reorienting because of the actual politics of the time, and the things that led to this era of excess and austerity. When I look at these queens, they want to be fictional characters. That has always been a beautiful dissonance. I went to the National Museum of African American History & Culture [in Washington, D.C.,] for the first time recently and found it fascinating. We start in the 1400s with the slave trade and then there’re all these moments in history where people are fighting bitterly to be free. Then in the 1960s and ’70s, it got real hot with the Black Panthers and all these radical groups starting to collaborate, and the government is like, “We have to break that up.” The Panthers are gone and suddenly we’re in the ’80s and it’s Oprah, Bill Cosby, superstars everywhere.

It seems like the powers that be realized that, to keep the world order, they had to deliver these fantasies to people to confuse them and get them off the scent. And honestly, looking at today, a lot of that stuff’s only continued, and now people have taken those fantasies and pumped them into this idea of radicalism. Within that there’s stuff that’s real, and then there’s stuff that’s not real. But you can’t tell it apart unless you look at it with hard eyes.

J.S.: My whole existence is that era. My mom named me after a character from [a spinoff of the 1980s soap opera] “Dynasty.” She was obsessed with Republicans and the Middle East, so my middle name is Tyran [a reference to Tehran]. This was down to her schizophrenia. She made 10,000 schematic diagrams of common objects in the house that she was trying to submit to the Home Shopping Network to get invented. She became so obsessed with imitating and copying the infection of capitalism — it ended up shaping me as a human being, and my artistic pursuit. And it’s interesting to see how my peers don’t even know what they’re imitating now.

M.R.J.: For me, that raises the question of who my people are. I started this conversation by saying that I’ve been having complex feelings, and that’s part of it. I thought I knew who my people were, but now I find myself feeling a bit alone. I keep watching the movie “Invasion of the Body Snatchers” (1978) because the idea of pod people resonates with me — this idea of people who’re doing the same thing and trying to get you to be like them. There’s something in me saying, “I can’t trust anyone, because they might pull me into some pod people stuff — I’ve been a pod person before. And it sounds like paranoia, but I also see how people are inconsistent because I see how I can be inconsistent. When I look at other people not recognizing how they can be inconsistent, I worry how we can progress in this self-deluded world that’s constantly having ideas delivered to you from culture, politics, whatever, that’re purposely trying to keep you uninformed and confused.

J.S.: I’ve always welcomed erasure and am constantly trying to shift skins. I had a traveling museum survey that started at Carnegie Mellon [in 2021] and, when I went to that survey, I almost cried. I saw a whole room of works from seven years ago that were completely out of context for the person I am today. But they were a part of me. I’m going to spend another seven years making something that represents the stage I’m in now, and those works will have a conversation with each other. What I’ve learned to do is be messy: There’s no such thing as mistakes, because everything can be recontextualized.

M.R.J.: The tricky part of it is when other people try to hold you to what you said as evidence in the court of public opinion, [assessing] whether or not you’re a hypocrite. Social media culture has become so horribly linked to what art and entertainment are being made, how they’re viewed and how they’re produced. So much of my voice as a writer was developed on social media and specifically Facebook. That box that said, “What’s on your mind?” I took that as a personal challenge; I have a catalog of every thought I’ve ever had. Sometimes I’ll cringe because I don’t know who that person was, but it was part of my development.

J.S.: I mean, the world’s in pain, especially after the pandemic, where lots of jobs were lost and isolation caused a lot of mental illness. We’re in the revenge generation. [But] that doesn’t leave room for artists to grow. We’re eradicating problematic people as if the person who’s throwing the stone isn’t problematic. But everyone is.

This interview has been edited and condensed. 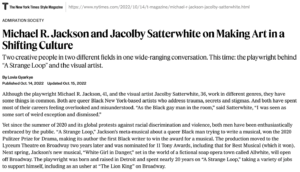