Because Cleveland can't have too many theme songs...

The "Theme Song for Cleveland and Akron" was commissioned by FRONT International for the 2018 Cleveland Triennial. Made in collaboration with the Rock and Roll Hall of Fame and the citizens of Northeast Ohio, the lyrics were created via survey to respondents in the region.


Jonn Herschend received an MFA from the University of California Berkeley in 2006 and exhibits nationally and internationally. He is a winner of three Golden Gate Awards from the San Francisco International Film Festival, and has received two Danish Arts Council Grants, the 2014 SFMOMA SECA award and the Fleishacker Eureka Fellowship. His film, Discussion Questions, was included in the 2014 Whitney Biennale and was an official selection of the 2014 Telluride Film Festival. He is co-founder and co-editor of THE THING Quarterly and is represented by Gallery 16 in San Francisco.

Silas Hite is an Emmy-winning composer with music in his DNA. He began his career co-scoring blockbuster and independent films such as Nick & Norah’s Infinite Playlist and Cloudy with a Chance of Meatballs with his Uncles, noted composers Mark and Bob Mothersbaugh (DEVO). His music plays in television shows around the world, from kids shows like Shaggy & Scooby-Doo Get a Clue!and Disney’s Dance-A-Lot Robot, to adult shows such as Blue Mountain State, Eureka and Chef’s Table. He has scored hundreds of commercials for clients such as Apple, McDonald’s and Chevy, earning him an Emmy, Adweek’s Campaign of the Decade and most recently a Titanium Grand Prix from Cannes. He’s contributed memorable music to some of the top selling video games of the past ten years such as The Sims 2, Skate 3 and The Simpsons. His music has played in such venerable institutions as the San Francisco Museum of Modern Art, the Los Angeles Museum of Contemporary Art, the New York Museum of Modern Art and The Whitney Museum. 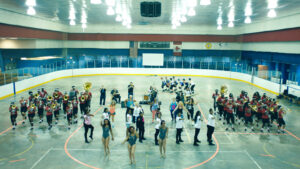