The artist, writer, and curator Peter Scott continues his manifold explorations of urbanism and its relationship to representation and perception, as most recently staged in his shows at the Emily Harvey Foundation and Magenta Plains gallery, as well as his curatorial projects at his nonprofit Carriage Trade. An exhibition of his newest work, “Future City,” a perplexing play on fiction and authenticity, is on view at the Suburban in Milwaukee through February 10, 2019.

I PARTICIPATED in Front International in Cleveland last summer, and its curator Michelle Grabner then invited me to do a show at the Suburban in Milwaukee. Given my interest in urbanism, locality, and media, the Suburban seemed like an ideal site to do a project in. I think the venue’s name refers in a sort of ironic way to the contemporary condition of urbanism, which is an increasingly homogeneous one. The building has both a picture window and a mansard roof. It’s a pastiche of architectural styles that also has the feel of a home, with shutters and a pitched roof.

The work that led to “Future City” was a series of photographs, included in my “Arcadias” show last spring at Magenta Plains, that document life-size banner ads showing rendered interiors at luxury-condo construction sites around New York. I cropped these images in a way that makes the fiction of the ad look more real than its surroundings. You can see glimpses of the construction sites in my pictures, but the frame is mostly filled with the illusion of the ad itself. This confusion between the real and the fake expressed a disorientation that I felt in Williamsburg post–Bloomberg rezoning, when the neighborhood shifted dramatically. In some ways, you almost didn’t know where you were. You’d have to double-check that the place where you planned to meet someone still existed before going out, or you might find when you got there that it had been displaced by one of the many franchise stores that started to appear in the neighborhood. 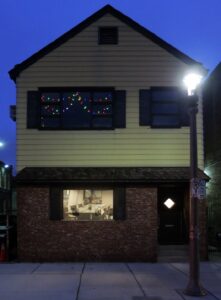