Richard Andres was an odd combination of an artistic hermit and a figure on top of the latest developments on the contemporary scene. After studying at the Cleveland Institute of Art on a National Scholastic scholarship, Andres immersed himself in painting, spending off-hours at the Cleveland Museum, focusing on artists such as Van Gogh and Matisse. When asked to describe his art, Andres struggled. “It’s hard to describe art. Art is something that’s there, to look at. So words are very difficult. Essentially, the closest I can come is to say I’m a 1950s painter. The ‘50s was sort of an attitude toward art. It was going to be big. It was going to be strong. This great big group of painters had this attitude toward painting and it’s hard to pin it down because each painter was different. It really is a style that’s hard to define but the term ‘abstract expressionism’ is often used.”

According to 60’s critic Helen Borsick “Technically his paintings are abstractions, but that is only part of the story. Andres’ complex style of composition – strong in design and drawing – involves compartmentalizing the canvas with favorite signs, figurative allusions and symbols. Any degree of familiarity with his canvases develops recognition of his painting language and repeated forms as well as of the endless nuances of color tints and overpaint and underpainting methods.”

Some of Andres’ inspiration came from other artists, once stating that Edward Munch, Emile Nolde and Max Beckmann ranked within his top 10 most admired painters. While often being his own worst critic, Andres grew content and more relaxed later in life, saying, “For years, I’d do a painting and say, ‘But it’s not good enough. You try to achieve something and you overachieve it but it’s still not good enough. I finally did a painting and looked at it and said, ‘That is good enough.’ From that point on, the older paintings got better in my own mind.”

While with his finger always on the pulse of his more famous contemporaries, Andres was content to simply produce, preferring to avoid the limelight.

Director Michael Wolf describes his discovery of this trove of “masterful abstraction expressionist works” as “a rare and wondrous event,” and comments that it evokes “the heady times of the mid-century American art world.” 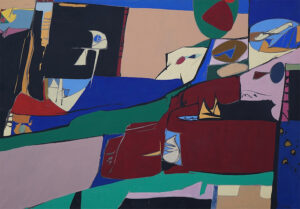